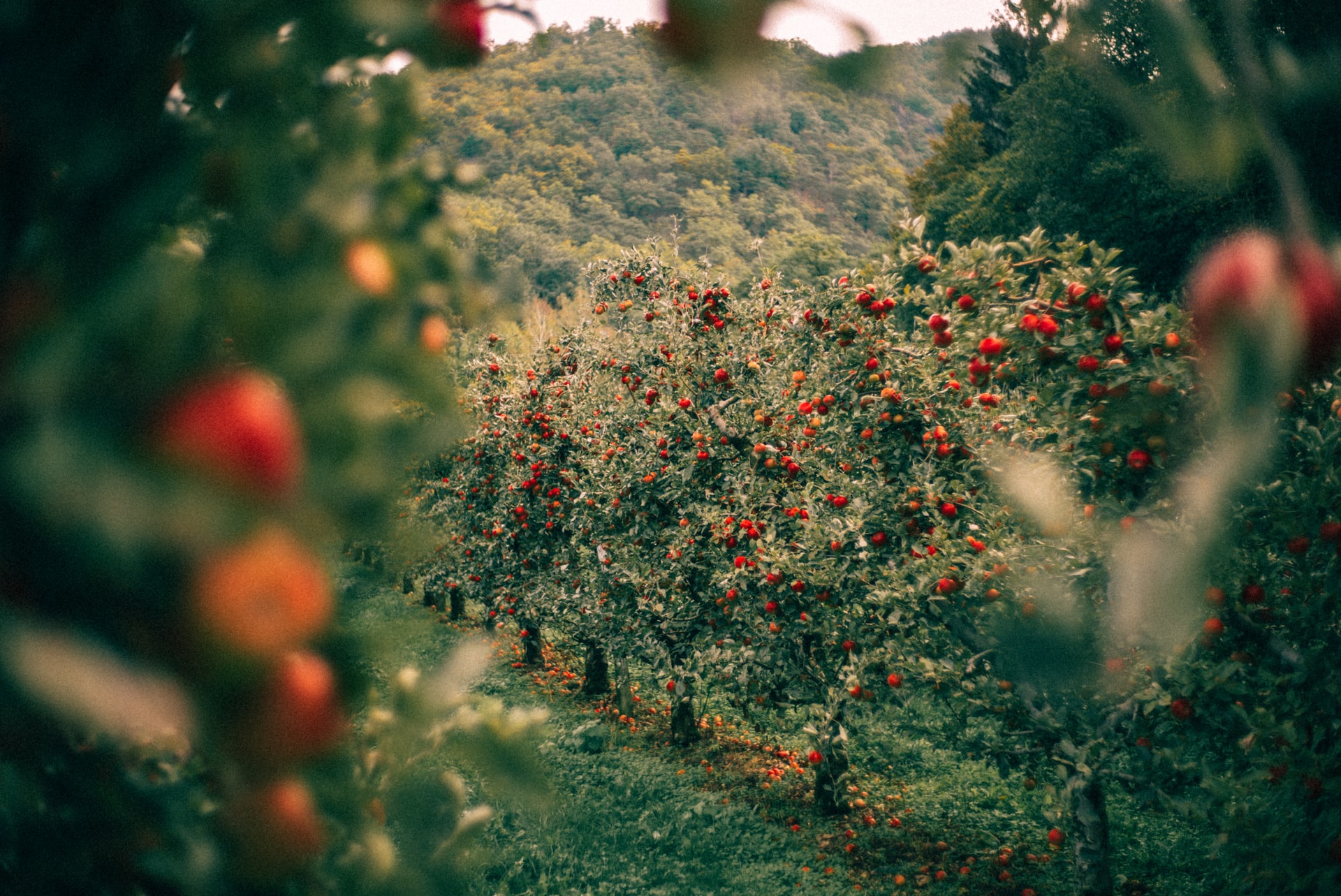 Long ago – actually, so far back into the distant past that to speak about this time seriously borders on arrogance – a tree community of apples gathered together for an urgent conference.

You see, there was a frightening crisis afoot: the world was terrifyingly hostile to the flourishing of apples, and it bothered them greatly – right through their smooth skins, down past their fleshly bodies to their trembling little heart-pips. There were so few apples left in the world that some respected apples on that tree estimated that theirs was the only tree left. Haunted by the increasingly likely chance all apples would disappear off the face of the earth forever, they huddled together – shielded by sympathetic branches, their grave voices drowned in the whimsical dance of a crying wind.

The conference was no simple matter – not as if you haven’t figured that out already. The noble objective was to divine a strategy to ensure their survival. Brilliant apples spoke in stentorian apple-speak, passionately arguing why their own technologies were more likely to succeed. The older apples listened, their silences no less momentous nor less passionate than the eloquent submissions of the apple-folk (or apple-an in apple-speak, the suffix ‘–an’ meaning ‘of the apple-y ones’). But from elaborate springboards to launch missionary apples skyward to hopefully more fertile grounds, to building walls around their tree so those pesky non-apple robbers (especially the wolves) wouldn’t be able to eat them, all their ideas seemed impractical. For one, apple-ans didn’t have opposable thumbs. The elder apples were beginning to resign themselves to their gruesome fate.

But one whispery voice pierced through the proceedings. All the apples turned to look. It was Hum. No one cared about Hum. She hardly spoke to other apples. Some swore that she didn’t even know how to speak. They said she just hummed all day and kept to herself. But no one cared all that much to find out why.

Hum had everyone’s attention at last.

“Would you care to speak louder, young apple? What is your name and what is it you want to say?” an elder apple sounded her authority, her clear voice rustling through the leaves, tickling every apple-body as it rippled along its merry way.

“My name is Hum. And I have a strategy to help us multiply.”

Hum turned to the bipedal brutes in the dipping distance away from the tree.

A hundred apple-bodies turned to look at them. They had no names. Not yet.

“I mean, they can be our strategy. We let them eat us, and we’ll use their bodies to spread ourselves everywhere. Though our first problem would be to find a way to attract them to us.”

The whole tree exploded in uproarious derision of Hum’s plan. They laughed their pale red skins to painful wrinkles. One delirious apple accidentally fell to hungry wolves below. Silence was automatically reinstated. The elder gulped as the wolves tore that apple-an to shreds. Her voice once again found its way through the tide of simmering red contempt to Hum’s branch.

“You mean we shouldn’t think about protecting ourselves from non-apples, but should instead give our apple-ans to their insatiable bellies?”

“No, just those ones there. I have watched them for a long time. They are very mobile. They eat things and spit out the parts they don’t like. Our heart-pips are hard. They won’t like to eat that. Even if they do, they’ll poop it out. If we got them to notice us, we could give them our bodies to eat. Hopefully they spit and shit out our heart-pips in new places, and then we grow…”

“This is defeat!” one apple-an yelped in desperation. But Hum’s voice was a decibel above the rest today.

“Yes, but it is a defeat more powerful than victory! Can you not see it? All our plans aren’t working. It’s time we considered something different!”

It was the loudest Hum had ever been. That was startling in itself. Presently, a solemn silence descended on the tree. No one spoke a word in response. The apple-ans are a quick-witted folk. They quickly knew and understood what Hum was asking for, and they quickly realized it was their best bet.

“How do we do this?” another elder spoke, his voice quivering under the weight of his days. Everyone expected him to have dropped to the wolves many moons ago.

Hum was silent for a while, then she spoke up.

“We need to make sure the reddest, fleshiest, most attractive ones among us get outer-branch. That means those of us who are pale-skinned have to drop away for the red ones to be seen.”

That moonlit night, Hum spoke to the apple-ans, serenading them with stories they hadn’t heard before. She told them their hearts were hard, and that it was this hardness that gave them a chance. Every apple listened keenly.

In the morning, the tree shone with a sensuous redness, its feet littered with the chumped up bodies of the pale apples that had sacrificed themselves for the more inviting apple-ans. True to Hum’s words, the brutes smelled the fair ones and came closer. They plucked them off their branches and dug their dishevelled teeth into their white flesh. Their eyes rolled back in ecstasy as the sweet apple bodies infiltrated their own brutish bodies. When the brutes got to the apple-pips, they spat them out because they were too hard. Those beating hearts touched the earth and some of them sprouted radicles. A knowing smile spread across Hum’s face as news of ‘touchdown’ spread across the tree.

Many seasons passed and Hum was now the most celebrated and most elderly apple. There were many other young trees around now. And all apple-folk celebrated Hum for her wisdom and her fortitude when it was most needed. Because the brutes were so instrumental to their flourishing, the apple-ans named them after Hum. They christened them Hum-ans, meaning “of Hum the Apple”.

On the night Hum was most likely to die, she gathered all her tree-kin to the sound of her voice. Her ministers whispered some bad news to Hum as the murmuring apple-folk fell quiet.

“The Hum-ans are getting very intelligent. They have eaten too much of our flesh, and now their eyes know glorious things. Their eyes are open. They are almost as intelligent as we are.”

“Yes,” another minister intoned. “We hear that some of them now put our bodies in fire. This is not good for our pips.”

They turned to Hum. Her breath was whispery and faint. But she needn’t have stressed her voice too much. All the apple-folk strained to hear every word she uttered.

“You worry too much my people. I have a plan. It is time for Phase 2.”

“Yes. Phase 2.” She continued. “Now we must infiltrate not only their bellies and their throats, but their larger culture that is emerging. We must insinuate ourselves into their stories, into their myths, into their songs.” She looked over the dipping distance where a number of the Hum-ans now made their way to an apple tree that stood proudly where none was some seasons ago.

“In time, they will name themselves in alliance with us. They will name their body parts after us – perhaps their bulging throats where they seem to enjoy us so much. They will think of us and our sensuous kin when they try to procreate. We will become their icons of the sensuous. When they tell their stories about how they came to be, we will be in those origin stories – hiding in the details while they imagine themselves magic gods. They will name their cities after us, and we will teach them about our beautiful songs of attraction and gravity. We will–”

“How will we teach them our songs and symphonies of attraction?” one minister interrupted Hum.

“I don’t know”, she shot back, a bit irritated. “Hum-ans are very heavy and dull. I suppose one of us would literally have to fall on a Hum-an head to get through to them. Let’s hope they know how to listen.” Her gaze returned to the distance. “Don’t worry. We will quite literally become the apple of their eyes – I promise you. I promise you. We will spread across the face of the earth.”

Down the tree, a lone wolf studiously watched the apples huddling around Hum as she finished speaking. With a start, it leapt away from the tree and ran through the bushes, past the lake, stealing through the night with the ease of a thief. It arrived at a small clearing where a wolf pack lived in fear, and where some of them had lain wounded from their battles with the enemy bi-pedals just across the lake.

“Guys! Guys!” The arriving wolf cried. All the wolves stopped what they were doing and looked up.

“You won’t believe the idea I just had! Alright, alright. Listen up. Wait for it…think cute pups…”