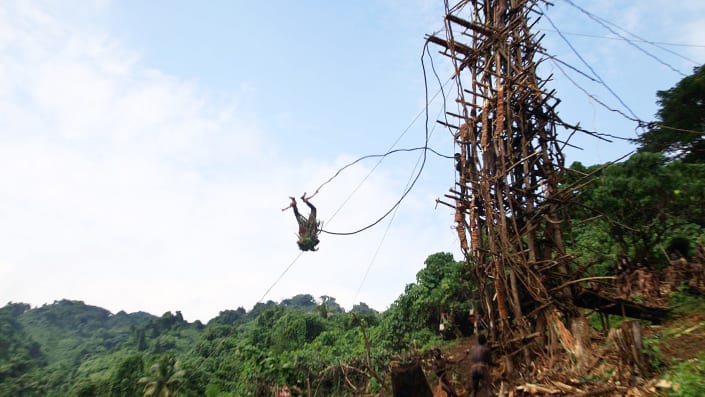 In the Thinnest of Places: Initiation as Empowerment for Civil Action

When I turned 18, I was serenaded with little wrapped boxes of surprises, birthday cards and the one artifact that was existentially crucial to the celebratory proceedings: cake. I had lost my father three years earlier, so he wasn’t around to usher me to the vaunted gates of adulthood, to see me take my first manly steps into the heart of things.

I had to make do with fleeting commentary from uncles and guests, and a generic awareness that becoming 18 years old somehow granted me access to the shibboleths of manliness–that, even though I didn’t feel like it, I had really become a man. “You are no longer a child, you are now a man,” said my uncles, goaded by the bonhomie of the atmosphere–a sentiment my sisters chuckled at.

However, there would have been nothing to laugh at if I had tied sinewy vines to my feet and jumped off a 90-foot wooden tower, plunging myself toward an uncertain outcome in glorious free fall–the gritty textures of the hard ground screamingly rushing up to greet me. To become a man in the Melanesian culture of the Vanuatu peoples, one must perform the n’ghol, a ritualized precursor of bungee jumping–without the assurances of safety equipment. It is said that the young candidates take weeks preparing for this rite of passage, abstaining from sex and choosing their own vines. In what must be a most horrifying spectacle to behold, at least for that species of the human race whose moments of heightened awareness are often occasioned by the number of “likes” generated by a Facebook post, the “men” climb stiff heights and then hurtle toward the ground, their heads only a few centimeters away from certain death by the time they come to a dangling stop. Of no less propinquity to a quick demise is Maasai lion hunting, in which young men-to-be must vouch for their courage and spirit by killing a proud lion with the comparable whimsicality of a thrust spear.

In that thinnest of places, in the hushed moment just before the spear breaks into the taut hide of the “king,” between the bloody ground and a human head, something transformative happens: a man is born into the world.

To an 18-year-old African boy, brought up and shaped by the modern abstractions of urban life and the luxurious conveniences of a flush toilet, eating cake had to do. It was seemingly the best that could be offered to reassure me I had become a man.

Perhaps one of the more fundamental aspects of our modern disenchantment is the gradual loss of meaningful rites of passage and initiations. Ensconced in the numbing illusion of safety, separation and sedative order, we might immediately protest the needless exposure to danger and death that these rites involve–but that would hide away the fact that the precious premise of such rituals is the transformation of normal ways of perceiving reality. To radically alter one’s experience of himself, his relationships and his world, to loosen the threads of common perception and break open the matrix of the real, to summon new identities from beyond the latticed enclosures of culture and orthodoxy, one needed to be brought to the veil. One needed to be initiated.

Initiation is not indigenous entertainment, the ancient equivalent of thrill-seeking teenagers burning rubber on asphalt. In its most profound sense, initiation is empowerment, an attunement to a different order of life. By contemporary standards, empowerment is the reinforcement of the human will, the legitimization of preference by recognized authority or the permission given to another to act within certain parameters. This notion of empowerment leaves human agency intact and colludes with the inner logic of the status quo. Some Buddhist teachings speak of certain ceremonial initiations (wangs) or “empowerments” in a different way–not in a masculine sense as mere enablement, but in the very feminine sense of surrender to a “higher” discipline or a “deeper” calling. This disruptive sense of empowerment is largely missing in today’s conversations about emergence.

This is changing, however. The notion of empowerment as initiation, as an uncoupling agent, as a psychedelic catalyst that stuns the habitual mind into an alchemical quietude conducive for radical realities to be perceived, couldn’t be more urgently needed or desperately important to today’s discourse on social change.

I am not alone in believing that we need pockets of mass initiation rituals, a cultural rite of passage to break our dependence and affixation with normative modes of experience–and that this amounts to a deeper kind of empowerment. The writing is on the wall. For civil society, plagued with accusations of complicity with the establishment it appears to resist, the questions are slowly changing. Instead of asking, “How do we continue to force the hand of the powers that be?” there is a growing desire for the creative enactment of a different notion of empowerment–one that at least complements efforts at resistance. There is an emerging sophistication that acknowledges that the more assiduously one resists the “other,” the more likely it will be that we take on the shape of the “other.” In short, something other than the master’s tools is needed to dismantle the master’s house–a different sort of empowerment, an initiation–something that brings us again and again to the thinnest places.

Today, the politics of outrage is wearing us down. Recently, I listened to a seasoned environmental activist from Brazil as she shared her insights about the establishment of carbon exchanges where emission credits–or the right to continue to pollute the environment–are traded. She chuckled when she noted that these regulations are a direct result of climate justice movements pressing for low carbon emission rates. As I listened to her, it became clearer to me how our best efforts often end up being co-opted by the dominant logic, how continuing with the same linearity, with the same rituals, with the same presumptions can often be counterproductive.

We need to retire into silent sanctuaries where our tired vision and pretensions to realism are purged and reinvigorated–where we are empowered in a way that transcends institutions and normative politics.

I am suggesting that we need to find other wells of empowerment and that the mere exercise of brute political force (which largely characterizes civil society action) is itself symptomatic of a prior initiation into modernity; into the dangerous ideas that the universe is merely a collection of blind clumps of matter, that we are alone in the exercise of agency and that “nature” must be reined in to adhere to our world-building agendas. I am suggesting that we make the transition from ordinary to sacred perception, that we deepen, expand and stretch our imagination of what is possible.

I can think of nothing more favorable to a civilizational initiation than the subversive act of turning to each other, of reviving our affinities with neighbors and community and earth, of learning to plant our own food and localizing our knowledge and economies. As things get smaller, more human-scaled, more down-to-earth, a different politics allows the participation of once silenced agencies and brings us closer to those thin places where we are reminded that empowerment is not merely the transfer of power, it is the overwhelming realization of powers more compelling than ours.