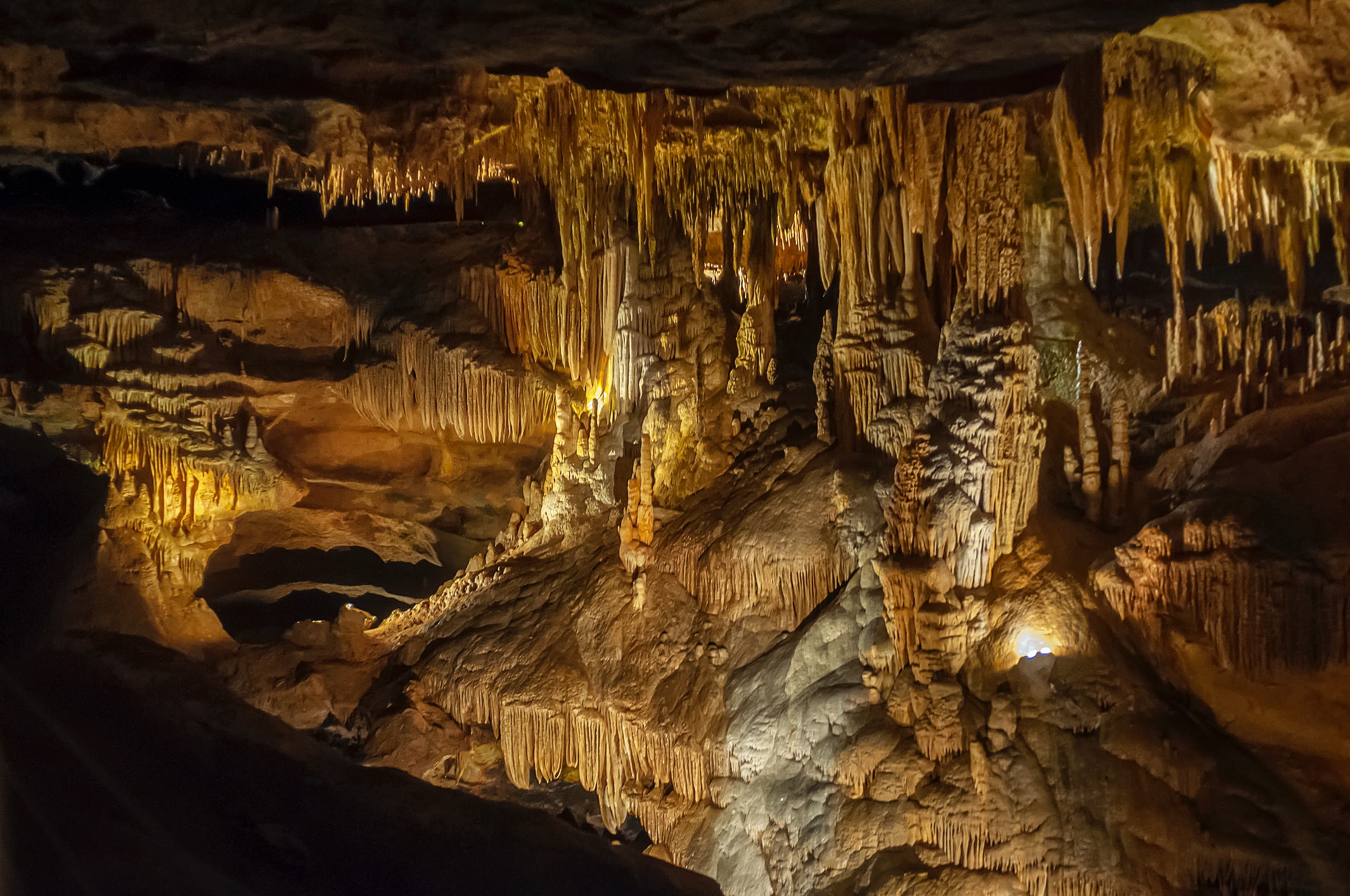 Romancing the stone: A visit to Luray Caverns

I recall thinking to myself, this is what it means to be inside a stone’s story. Ej said to me: “this is how nature ridicules art.” It was a very poignant thing to say, especially since we – a day earlier – had begun touching upon the ways life transcends story, and the way our overarching themes and plots divest the material world of its ‘telling-ness’.

The guides, shouting instructions at a teeming crowd of selfie-taking families, heedless youngsters, and screaming toddlers, kept reminding us that the caverns were discovered in 1878 by five local men, including Andrew J. Campbell (a local tinsmith) and his 13-year-old nephew Quint. They told us about the Washington Column, the wishing well (which was now filled prominently with dollar bills, rupees and coins from indeterminable countries) that had raised over a million dollars for charities in Virginia, and the famous Stalacpipe Organ. The floors of the cavern had been tamed with tiles, and some of the naturally occurring pillars were fitted with soft yellow lights encased in concrete cups, making it easier for families to embark on the 30 minute walk through the cavern – gaping at its ghostly stalactites and stalagmites, awwing and ha-ing and taking pictures with the formations.

It was a bit too touristy and modern for me. Somewhere within, I felt something crucial was missing. It was like walking through a museum, where something alive had been put up for display; it was like walking into a community without seeking approval. A certain kind of awe was missing, a wordlessness that was hushed by stories of discovery. And time. And achievements. And charity. The creeping figures and lithic curtains and petrifying deposits were vibrant in ways that mocked ideas of origins and shape and form. When the ethereal sounds sifted through the formations, enveloping the ‘great cathedral’ in music that could not be heard by ears alone, I felt the stone – this one stone that was the cavern – had its own yearnings that could not be honoured by multiplying its age by millions of years, or giving one of its ‘parts’ the name of a former president. I came to the edge of tongues. I gasped.

I however feel I learned a thing or two from the cavern, whose name cannot possibly be Luray. Each of the individual stalactites that were being generated, piercing towards the cave floor like a billion needles, might have looked ‘individual’ to me – but they were anything but. In a sense, each formation, each proud pillar (and one particular formation that looked like a giant candle melting into a puddle of wax and adoration – I called it the ‘goddess of the cave’) was what the ‘cavern’ was doing. A telluric involution. It was an ongoing generativity, an intra-activity that was a congealment of spacetime mattering. A queering of history and agency.

I took this recognition as a gift, and placed my head under a falling drop of water to be ‘baptized’ and blessed (something that everyone in our company later did) by the cavern, to be touched by a parliament of things. I appreciated how our claims to authorship, to ownership, to control, to moral coherence, to structure and instrumentality, often gets in the way of wilder wordlessness, a lithic silence more fluent than prose. The guides and their managers tried to make sense of a dead cavern by putting it in boxes that were understandable to them, hoping to electrify it with lightning bolts of discovery stories – but the stones were alive long before this. They didn’t ‘need’ those labels as such – they were already enfolded with meaning and yearning and wonder and shadow.

I read the writings of the cavern and felt in a resounding way how meeting trouble, encountering irony and noticing intra-ruptions are ‘invitations’ to languages deeper than jots and tittles. Maybe when we gasp, and do not know what to write, it’s ‘because’ we are silently aware that not all sentences are made of words. Maybe becoming imperceptible is learning to be still – for by being still, we might notice the grandeur that stillness and words are stitched into. Maybe my in/sincere attempts at self-effacing scrutiny, and my theo-clinical quest for moral supremacy and professional exactitude are what the ‘cavern is doing’, a queering of beingness too precious to last, too transient to not be forever. Maybe things go ‘wrong’ not because they err from an established pattern, but because we have patterns.