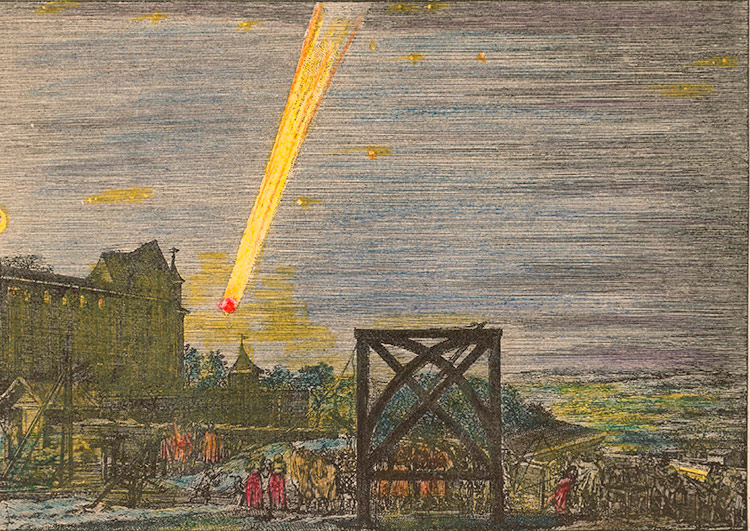 The sacred is awkwardly closer than you think

I’m in London, where I will be giving a public talk on the awkward immanence of the sacred – or the idea that the ‘sacred’ is not exterior to, fundamentally de-linked from, or outside the everyday. Yes, even the banal. Or that intuition is not the adversarial ‘other’ of intellect.

One way I think is useful to talk about this, beyond merely insisting that enchantment is not in short supply, is to recall the events around Halley’s Comet’s passing in the mid-18th century.

In the sixteenth century, Copernicus had published his dissertation on the sun being the calculated centre of the universe, and not the earth. His work hadn’t yet infected popular culture, but it inspired Edmund Halley (centuries later) to try to advance a theory about the passing of a comet. Halley’s bold thesis was that the comets that had been reported in previous observations, and on different occasions hundreds of years before his work, was the same one – just one comet. He calculated that the comet made appearances every 75th year, and would show up in 1758. Halley didn’t get to see his prediction come to pass (or fail to come to pass) since he died 16 years earlier in 1742. What’s interesting here isn’t to affirm that the comet – later named in his honour – did show up in 1758, it was the religio-political context surrounding his work.

In those days, London was a lot different: people saw the earth as central in the universe…a testimony to a grand creator’s infinite benevolence. The advent of science – with its postured repudiation of anything not rational or logically derived or empirically supported as nonsense – seemed to threaten religious interpretations of ‘reality’.

According to one account I have since lost touch of, people were fond of seeing ‘comets’ as angels on errand. Halley’s shocking prediction thus became a line drawn in the sand, because if he was right, then what use did people have of a creator ‘God’? Could God himself and the vanishingly little space science had allocated to him (now in the heavens) be totally snuffed out? How do we meet the sacred if it is nowhere to be found – totally exiled by the regular?

For us today, dyed in a machine-saturated world, meeting the sacred feels even more urgent. For old Londoners, the sacred evoked ideas of spontaneous irreverence – of order, but at least order premised on an ‘Orderer’, whose supreme will was the real activator behind things. Regularity and predictability were therefore evidence of the absence of the sacred, because regularity is the logical extension of machinistic determinism, and determinism is where the wild things fear to step into. One way post-Halley theologians dealt with the cognitive dissonance prompted by science’s stunning success was to perch God atop this new pyramidal order of regular things, which science was eminently in touch with. But this approach proves to be unflattering and inadequate to more robust notions of the sacred. This went further, I think, in dissociating the sacred from matter, from the carnal, from the familiar, from boring stuff – making it something spectacular, only to be seen once in a while, before the ordinary continues its drip-drip-dripping monologue of no real consequence.

The question is: why is regularity or even predictability so resistant to our notions of the sacred? Why can’t laptops, hand-held devices, the brown smooth things produced by McDonald’s (in the name of food), and even ‘evil’ little things like neoliberalism be inducted into our hall of sacred fame? The problem here is a problem of frames. The trick, at least with the politics of Halley’s Comet in 1758, is examining the conditions that make ‘regularity’ possible.

We still imagine that we are immersed in some kind of Euclidean construct where spatio-temporal relations (or space-time) are already worked out – or ‘objective’, in the sense of being ‘true…no matter who’. So, regularity, duration, and the seemingly forward movement of time become a property of the world outside of experience; we fail to notice how we are complicit in the ‘co-production’ of regularity. How our bodies, our increasingly homogenized systems of thinking and seeing, our economic imperatives, our sciences and discursive practices are all involved in ‘granting’ regularity to ‘non-sacred scientific events’.

Time isn’t ‘out there’, already pre-given or predetermined; many studies suggest many non-humans with faster metabolism experience time in slow-motion. You might counter by saying the experience of time is different from the ‘reality of time’ – and even if that were not the case, duration (which hardly concerns itself with how much time has elapsed as it does with the fact of sequences and frequency) is the concern here. To that, I would say that even duration is a bodily secretion – a performative enactment of visual modes, cognitive apparatuses, and environmental constraints. Nothing ‘is’ that is not ‘with’.

What is of consequence here is noticing that the sacred happens ‘in between’. It is not a property of things, the label of a body posture, a certain way of seeing or talking, eating vegetarian foods (thankfully, my hosts here just filled me up with good meat), a workshop, or pulling off a ‘namaste’ when greeting someone. And yet it is all of these – and that’s not a paradox, because, again, the question of the sacred or the question of what matters is one without a decidable answer. It is the indeterminacy of it all, the promiscuity of boundaries, the con-fusion, that makes the sacred already integral (not supplementary) to how the world continues mattering. The world doesn’t stop being sacred because we start to understand it – and that’s mostly because understanding is not a relation of exteriority or of final approximations, but of ongoing participation. The old Londoners who despaired at the passing of a comet were part of a ‘larger’ articulation of the sacred that is trapped in a tradition of fuzzy, distant (and therefore mystical) entities; the familiar, the near, is just as fuzzy – just as shape-shiftingly lascivious.

I suspect that we are witnessing (or rather ‘with-ness-ing’) the changing ontology of the sacred, a rescuing of what matters from its onto-theological moorings. This is not a quixotic issue of willful construction; I am not saying “let’s go out there and change the sacred, godammit!”. I’m saying different temporalities, currents, flows and winds are a-stir. The awkward is taking on a beautiful graciousness that wasn’t present (in its contemporary forms) in previous times. The awkward is coming back, like an old comet becoming new.

So, here’s a prediction…