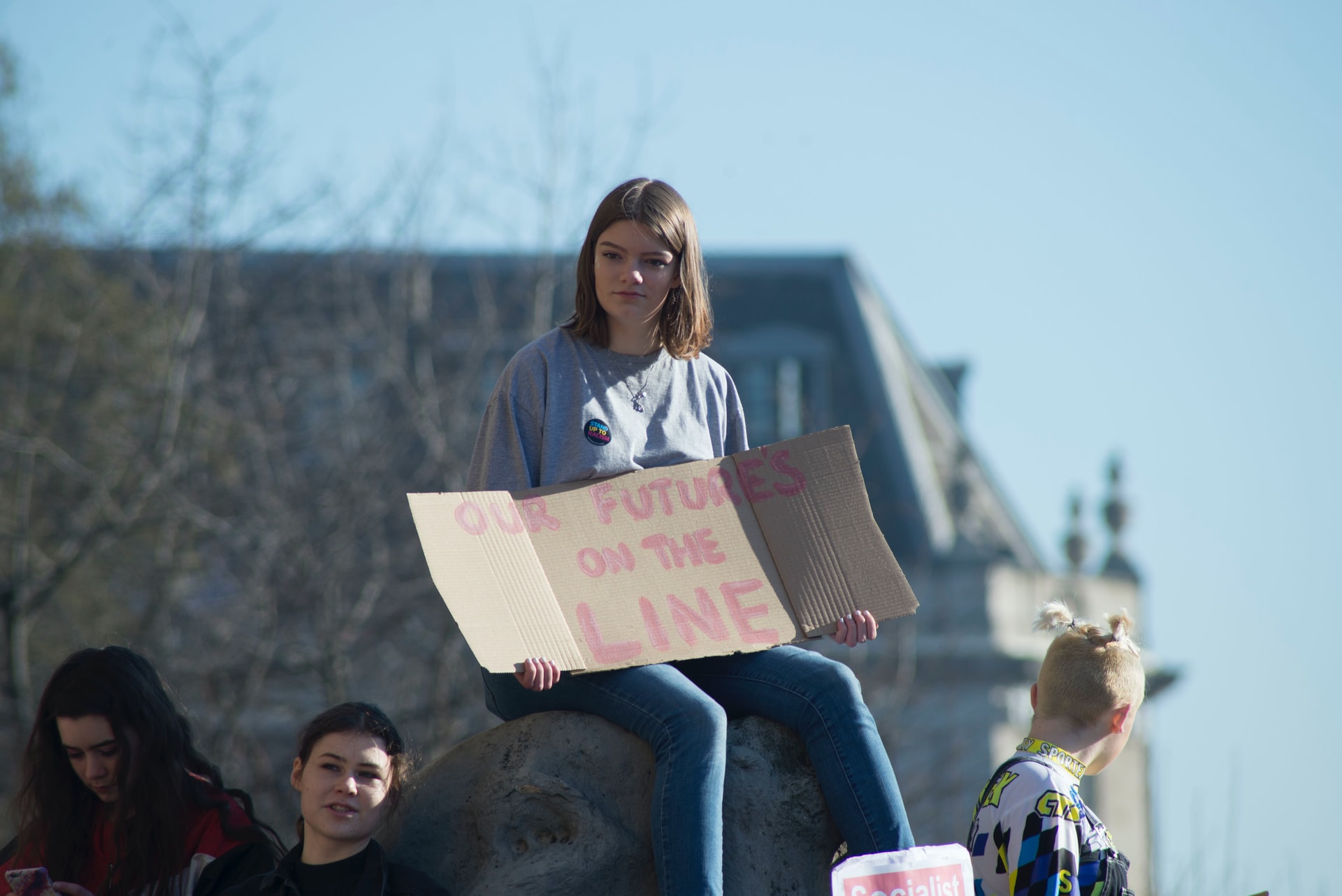 The task is not to abandon identity politics

The task is to free it to become something stranger.

I read a touching comment from a woman on Facebook. She wrote that she was an elderly woman, and wanted to see – before she died – a female President of the United States. Bernie Sanders is fine, she quipped, but she’d rather not vote for yet another old white man.

I understand this, deeply. When Barack Obama won the 2008 elections, eventually taking the White House in 2009, I drove around Lagos in my first car with a full page printout of that famous Obama Time Magazine cover taped to my windshield. “Why Obama could be the Next President”, the cover said, prophetically. During the presidential debates with John McCain preceding Obama’s ascendance, I would get on an “Okada” – one of Nigeria’s most popular forms of two-wheeler commercial transport – and travel across Enugu (where I was interning at the Federal Neuropsychiatric Hospital) just to get to a television that had a CNN subscription. I wanted to identify with those moments: when someone who looked like me was being validated by a globalizing culture that looked past me. I had a ringside seat to the battle of the ages, and I could not wait till Obama – like Okonkwo the wrestler in Achebe’s ‘Things Fall Apart’ – threw McCain’s back to the earth. In retrospect, I do not know that I properly studied the young senator’s proposals. It hardly mattered to me. Obama was eloquent, inspiring and photogenic. Obama was black; he secreted a preternatural coolness that made me feel my own blackness could now be traded at the Stock Exchange for sinful piles of money.

Representation matters. In ways that often sneak past the stoic demands of reasonable choice – and often in ways that might even be self-defeating – we want to be seen and ‘represented’. I cannot imagine how liberating it would feel for many American women today – especially “women of colour” – to see someone like them promoted to the highest office in America after years being told that they are second-rate citizens, vestigial, pulled out from Adam’s side, tied to stakes and put on fire, and incarcerated inside the phallic dominance of patriarchy. To pass on the opportunity of electing a Kamala Harris, or an Elizabeth Warren – even an Amy Klobuchar – is a risk too great. They already came infuriatingly close with Hillary Clinton. So close – only to lose to a caricature of a man. It isn’t difficult to understand why those who insist on a female presidency are angry and bitter. There’s something not quite righteous about the present arrangement of things. And yet, regarding the woman whose comments on Facebook inspired this response, many might be critical of her “identity politics”, claiming that electing a woman is no guarantee of justice. That’s also true.

How do we reconcile the ‘truth’ of this yearning to be seen and represented with the seemingly contradictory ‘truth’ of its progressive retort, as articulated in the candidacy of, say, Bernie Sanders? I don’t think reconciliation is needed; I believe we can think in two registers without collapsing one concern into another. Without denying the anger, vibrancy and deep desires to be seen. Without downplaying the cautionary stance about glamorizing ‘identity’. I do not pretend to understand all the nuances of identity politics in its amorphous mattering, and in daring to put my thoughts to language I am certain there are already crucial (perhaps even painful) exclusions and omissions at work. I would say this then: identity politics is a useful tool. Without the insights and contributions of the conversations and movements that gave it its name, we might all be living in white-normative systems masquerading as “nature”. We would have no way of naming and distinguishing the oppressive power dynamics pretending to be natural. We would accept that some things are just the way they are because, well, that’s the way they are – godammit. This is important to understand because hegemonic power works by stabilizing ‘nature’ or presenting its agenda as “natural” or fundamental – a consequence of God’s own instructions, the irrepressible laws and biological dictates of our own bodies, and so on. This is how chattel slavery achieved such longevity. This is how black bodies became a measly fraction of their white counterparts. By disputing oppressive constructs of ‘nature’ and staking claims to power on differences from a dominant group, marginalized communities could march on ‘Mordor’ under the banner of sameness – insisting on equal power.

Such a strategy has its uses but also troubling limitations. Given that identity is a modern construct, it is shockingly amenable to the kinds of ‘abuses’ that define modern power. It is possible to imagine that we have invested so heavily in identity that we have fetishized it and frozen it and cleaned it up to be deployed as a weapon of resistance. The thing with weapons is that they can be used against us. Is it too hard to imagine that oligarchic powers and imperial might could fashion “the perfect candidate” to appeal to insurgent voices and quell the fires of revolution? My own country’s history as a British colony is replete with examples of that Manchurian strategy of using local proxies to further the objectives of empire. They bought black faces to do white business. Today, we are still ruled by educated black men and women who haven’t strayed far from the logic and legacies of old colonial lords. Diversity isn’t scandalous to empire: the status quo has ways of siphoning energy from difference, and instrumentalizing it to serve the familiar.

In retrospect Obama failed my political imaginations. I had hoped that this black community organizer and law professor would challenge American exceptionalism, and unleash a vibrant multi-cultural, multi-generational movement to challenge the centrality of the White House. I can assign no blame here, because I also understand that human behaviour is not independent of context. We are just as much tools to our technologies as we imagine them to be tools to us. We use and are used. The problem that identity politics may not comprehend, one which is often invisible in our fights for a seat at the table or a room in the house, is that the very house – the edifice of entitlements that privileges power as linear ascendance – is broken. It may matter little who sits behind the wheel if the engine has a mind of its own.

The collective anger that demands that a woman – preferably a black woman or a gay man – take the White House in 2020 is real. It is true. At some level, it is even beautiful. Also, the dismissal of identity politics as inadequate to the moment is ‘true’. It is beautiful. Both desire a different metaphysics. A more generous cosmology that allows even contradiction a place in how the world works. A metaphysics of irony and paradox. In the spiritual traditions that have named my people, identity is not stable or fixed. We are fluid and relational, constantly becoming, open in our reiterativity. Sometimes health proceeds from a sickness. Sometimes a lion’s carcass might be home to a swarm of bees and the honey they produce. Sometimes the enemy looks exactly like us, and my brother is the one that holds a sword to my throat.

There’s something ironical and prophetic about Bernie Sanders’ candidacy. By ‘prophetic’ I mean that the politics he espouses notices the architecture of oppression that makes identity politics a needed survival strategy in the first place. This is traversal politics here. This feels new – not a decoration of the system, not a proliferation of the photogenic, but a dwelling at the edges of the river, a gathering at the borderlands of the familiar. A breaking open of the fetish. Needless to say, I am excited about it, stirred by his courage, and thankful for the feminist traditions that inform his politics. If I were American, I would vote for him. This is not to say that a Bernie Sanders’ presidency fully resolves the contradictions, the pains and the losses suffered by women, by ‘people of colour’, through modern history. A vote – whoever it is cast for – is perhaps not enough to hold the weight of that Facebook user’s grief. This goes beyond Bernie Sanders and whatever legislative accomplishments his potential presidency might claim. What is needed is an emancipatory politics that liberates us from the exclusivity of modern power, from the idea that enchantment is in short supply. What is needed is a horizontality that relieves ascendance of the weight and sole burden of political power. What we need is a way of holding our transience, our losses, and the pains of not being seen. We need new experiments with identity, and must be careful we never deny it the gift of dying – as all things earthly must do. If we hold identity and the politics called to enshrine it too close, refusing it to drop it in the soil, it may die in our righteous grip.

To really take the present American elections season seriously is to stop taking it so seriously. For marginalized communities, the task is not to abandon identity politics or dismiss it. The task is to free it to become something stranger. The call is to disappoint power’s singular claims to absolute power. The call is for new strategies of locating ourselves. Only then might we find the prophecy of identity politics true: a world where it can rest from its important labours.