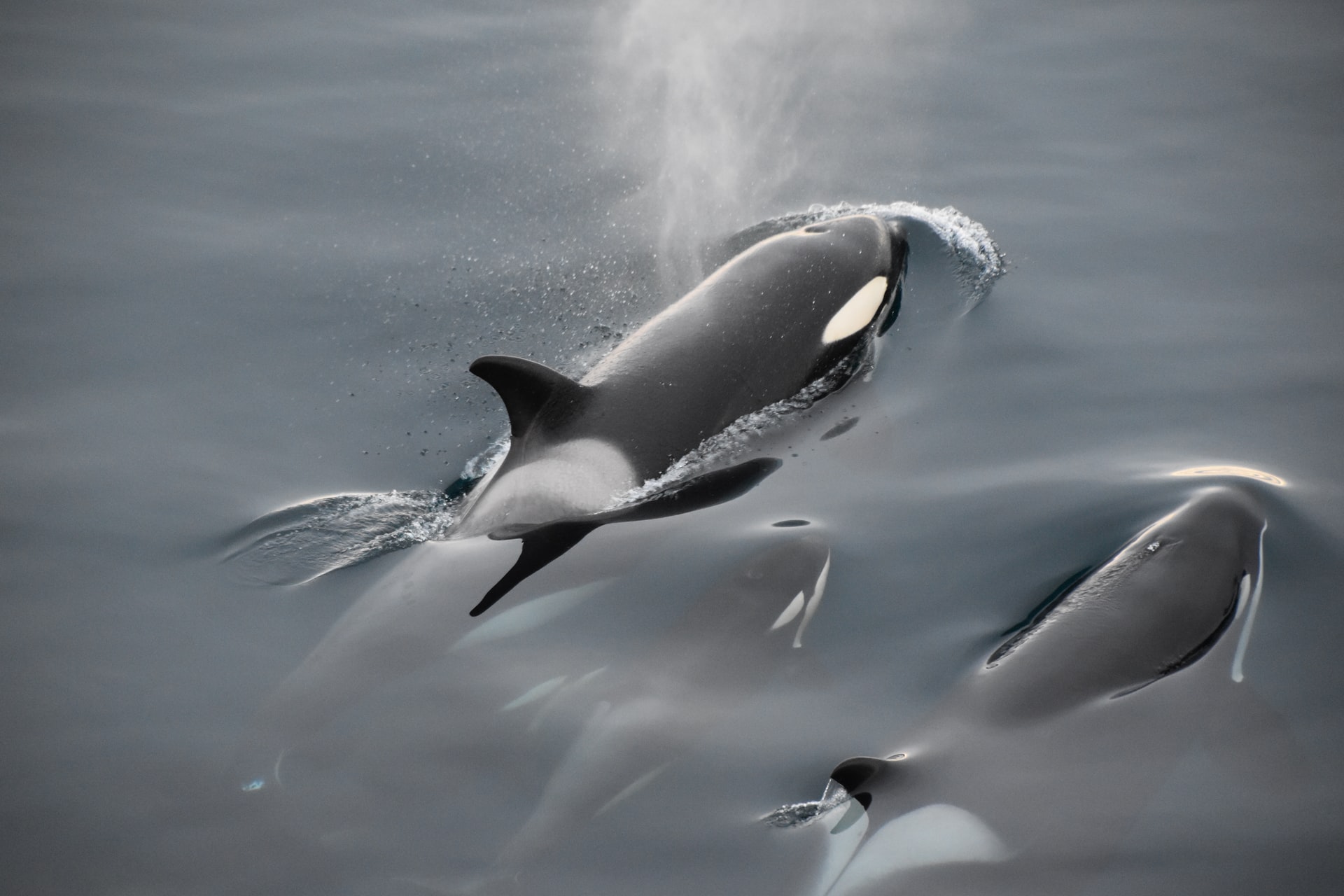 The Turning of the Whales

When famed New Zealander psychologist, Dr Paul Spong, was first invited by the University of British Columbia to study the sensory apparatus of killer whales at the Vancouver Aquarium, he no doubt thought his time with the cetaceans would be like his other experiments in the laboratory.

“I approached the whales as a clinical experimental psychologist,” said Spong, “getting them to do things as if they were no more than laboratory rats.”[1]

As with all other scientific experiments, the purpose was to tease out an influential ‘independent’ variable, hold back extraneous variables, while doing one’s best to lean away and observe changes as they occurred in the shifting dynamics of a largely stable environment. In this case, Spong wanted to arrive at an objectively verifiable appraisal of how the captive creatures used their senses to traverse their world. He theorized that orcas used their eyes sparingly, and depended heavily on sounds:

“Living in the ocean, these social mammals use sound to navigate, find their food and stay in touch with each other. It’s a very complex and varied world of sound.”

Understanding the special sounds they made held the key to unravelling the mystery of cetacean survival in the wilds. The challenge was how to stimulate those sounds.

Spong found out the hard way that the orcas were difficult to please. He had supposed that food would be good enough to motivate a vocal response from one orca in particular, but his Pavlovian schemes didn’t always work – even when his subject was hungry. Rewarding the creature with recorded sounds of other orcas may have been exciting at first, but that also quickly became old and boring for the subject.

One frightening encounter with an orca called Skana would however upend Spong’s entire world of fabricated distance and scientific hubris, shifting his paradigm of engagement so radically that he eventually became an advocate for cetacean freedom:

“Early one morning, I was sitting at the edge of Skana’s pool, my bare feet in the water. She approached slowly, until she was only a few inches away. Then, suddenly, she opened her mouth and dragged her teeth quickly across both the tops and the soles of my feet. I jerked my feet out of the water! I thought about it for a minute and, recovering from the shock, put my feet back in. Again, Skana approached, baring her teeth. Again, I jerked my feet out.” Regaining his composure, and now more curious than frightened, Spong dipped his feet into the pool a few more times.

“We did this routine 10 or 11 times until, finally, I sat with my feet in the water and controlled the urge to flinch when she flashed her teeth. I no longer felt afraid. She had deconditioned my fear of her. And when I stopped reacting, she ended the exercise.”

It was a moment of justice. Spong remembered the feelings of awe he experienced when he recognized that the whales were not ‘subjects’ after all: they were conducting experiments on him, just as much as he thought he had been doing on them: “I concluded that Orcinus orca is an incredibly powerful and capable creature, exquisitely self-controlled and aware of the world around it, a being possessed of a zest for life and a healthy sense of humour and, moreover, a remarkable fondness for and interest in humans.”

Dr Paul Spong’s emotional response is quite appropriate, given that the old narrative about ‘nature’ being dead and mute is fast losing currency. We should be surprised. The spectre of a world that isn’t merely touchable, but can touch ‘us’ in return – a world that breathes and plans and conspires and sabotages and plays behind the vicarious plainness of data and letters – now haunts disciplined explorations of the universe. Our old paeans to humanity’s greatness, to the miracle of our appearance, to the uniqueness and scarcity of intelligence, is now being humbled as we look closely at the world.

For far too long we have inhabited an epistemology that framed the world as a passive assemblage of givens. We assumed we were on the outside looking in. There was no other way, it seems, to explain the fact that everything else seemed still and dull compared to our vibrant internality or mental life. Humans sing. We dance. We compose the music we dance to with a spontaneity that the perfunctory morning calls of a perched bird cannot even begin to approximate. We have placed men on the moon, and brought them back. Little wonder Shakespeare’s Hamlet exclaimed:

“What a piece of work is man! How noble in reason!

How infinite in faculty! In form and moving how express and admirable!

The beauty of the world! The paragon of animals!”

As such, given our privileged position of superiority, ‘we’[2] took upon ourselves the righteous task of naming the world, as Adam did in Eden[3].

When scientists like Spong try to study the world, they lean back, assuming a posture of ‘objectivity’ – as if by touching things we infect their deadness with our vitality. As if the greater the distance between us and ‘nature’, the further we retreat into our divinity, where things are uncontroversially perspicuous.

It’s not merely the sciences. Our social contract seems to exclude the possibility that the world is alive. Economics is largely framed in terms of man’s ability to commoditize (or sanitize the vibrancy and wildness of) his environment. Politics sets up human concerns as central to our anorexic notions of justice. Spirituality, at least the kind sanctioned by some of the world’s biggest religions, is enacted as a form of escape – as inhabiting the promise of delayed ascension, leaving behind the blind wrath of the material world.

When we speak about climate change, neoliberal capitalism or some form of ecological disaster, we usually do so with the assumption that we humans caused these problems – unilaterally – and that we must necessarily account for these shortcomings by turning to ourselves. Even the most conscientious and well-intentioned gatherings – some of which are often derogatively labelled as New Age conferences – still permit us to think of the world as beholden to our storytelling prowess. The world is a story, it is claimed. And we are singularly responsible for its plot.

In short, we are alone.

With whales, Dr Paul Spong noticed that the animal world seems to have a logic and rhythm of its own: it will not be colonized or contained without a fight. The same is ‘now’ remarkably true of mountains, of trees, of stones, of rivers and winds. That may seem like a laughable thesis: the idea that stones may be ‘aware’ in some way that validates pantheistic values. But here, at the extreme edges of anthropocentrism, the air is rich with stunning proposals. In light of what we are learning, who is to say that the inanimate world is not vital and aware and responsible in ways that we never permitted ourselves to think through? What if we are not smart enough to listen to plants sing, to bees argue about a new location for their hive, or to stones breathe? Who is to say intelligence isn’t an ecological product, an intersectional phenomenon that doesn’t depend on brains[4] or souls? Who is to say that trees do not mourn or feel sad, or that lightening is not a yearning between sky and ground?

At least, with whales, we have suddenly met with a co-terran civilization; we have been touched by ‘others’, and they didn’t necessarily arrive in spaceships. Even if whales were the only species about whom we may speak in this manner, this is enough to challenge the paradigm of nature-as-mere-resource. This is enough to challenge us to rethink the self – not as a disembodied ghost, but as a network as delicate as a burrowing worm, as dire as a fly caught in a spider’s web, as consequential as a mountain’s yawn.

Once an indigenous non-western spark, a forest fire now rages – chastising the increasingly quaint binary formulations that paint the world as a series of versus statements where the former is inherently superior to the latter: human/nonhuman, man/woman, agent/tool, subject/object, language/materiality, god/man, mind/matter.

The world is alive, and this matters. This changes everything.

Think about it. If our world were visited by people from other planetary systems, and we were assured that they really did come in peace, wouldn’t we organize expeditions to the place where their ships have touched down? Wouldn’t we seek to learn about their culture, about how they traversed endless swathes of black space and freckled galaxies? Wouldn’t we strain to hear their call?

Today, a similar call haunts us. A restless itch. A liminal challenge. A deep and caring crisis. This is the call of compost, of whales, and of the nonhuman world to meet with them – on their own terms. And it seems we must launch expeditions to these new frontiers where we might meet the universe halfway. To the space between spaces where we can touch and expect to be touched in return.

This was what my friend, Chip Richards, did. Off the coast of his home in Byron Bay, Australia, he and his friends crossed the path of humpback whales making their way to Antarctica. They had hoped to film the giant creatures in this meeting. The whales pressed on as Chip pulled out his ‘whale flute’, fashioned by Native Americans to honour the song of the whales. As he started to play the flute, the whales turned around and made their way straight to him. They lingered near their boat, listening to Chip play, and then returned to the depths. Chip would later recall: “And when they finally returned back down into the deep, they left this massive tail print on the surface of the water that seemed to ripple out and surround us with this very humbling feeling of peace and connection.”

In the turning of the whales, an old friendship was rekindled. A new alliance was forged. And, who knows what might become of us as a result?

[1] http://www.pbs.org/wgbh/pages/frontline/shows/whales/man/sonic.html. For more about Spong’s work, read ‘Orca: The Whale called Killer’ by Erich Hoyt, from where all quotations are excerpted.

[2] By ‘we’, I do not intend to imply that humanity is one homogenous group. This more readily refers to the Euro-American world and its legacy of scientific reductionism.

[3] Isn’t it instructive that in the Judeo-Christian narrative about the first man, when God creates Adam, embedding him in a rich ecology of fellow animals, he considers him ‘alone’? Or that Adam is invited to name the animals, as if they were somehow without story or voice prior to the advent of man?

[4] Many aquatic creatures, such as the brittle star, display sophisticated intelligence without brains. In fact, brains may not be as indispensable as we used to think.