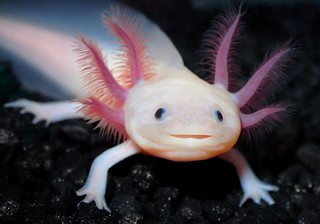 We have met the monster, and it is us.

What shines brighter than a star? A failed one.

When Thomas Young developed the ‘double slit experiment’ to find out the fundamental properties of light, he didn’t realize how weird things were going to get. Newton, before him, asserted that light was ‘corpuscular’ (or made up of little, localized, tiny, ball-like bits); other prominent scientists insisted that light was wave-like, spread out, able to interact with itself – like you’d expect the ripples over a body of water to do. Newton’s thesis was however canon – the official version of the story of light. Young’s experiment was supposed to be the final word on the wave-particle paradox.

And so when he set up his apparatus, sent a beam of light through the tiny slits, he was surprised to see an ‘interference pattern’…a result consistent with the theory that light is a wave. Not a particle. Weird observation number one: how could something localized behave like something distended?

Then when future physicists modified the experiment to observe which specific slit the light was going through, the end result switched back to being a ‘scatter pattern’. Weird observation number two: it doesn’t make sense; how could the mere act of observing the behaviour of light alter its fundamental properties?

Something crazy was going on. So they modified the experiment again. They sent little photons of light through the slit, one photon at a time. Their guess was that when they sent the particles the previous time, they must have been interacting with each other – thus forming an interference pattern. So they sent each bit of light one by one – spaced out over time – and yet, like magic, there it was again: an interference pattern. Weird observation number three: what’s going on here? This doesn’t fit our expectations of how the world works!

And then, finally, another modification was to delay the choice of observing which slit the beam of light goes through, until after it has gone through it. This is like playing peekaboo. What they observed was that when light had gone through the slit, it behaved like a wave, but before it hit the final screen, they peeked – and what happened has challenged our notion of time and reality ever since. Not only did the wave ‘switch back’ into particle, the act of observation affected the prior state of the beam, so that it seemed it had always been a particle. Almost as if the particles went back in time and changed their conditions. The future affecting the past. Effect before cause. This is like Marty McFly finding out he was never born, after almost failing to bring his parents together. Or like getting a black eye before being punched in the eye.

The morale of this story is not quite simple, but it is noteworthy: there is no fundamental, coherent, pre-given, exclusive formula or ontology to reality. Time isn’t fixed; identity is relational; matter is not a thing, it is an ongoing generativity. This disrupts the idea that all that is alive about the world is necessarily human to begin with. It suggests matter is mind, and mind is matter; that emotions are not what ‘we’ feel, but what the world does; that knowledge is not about exposure to an already determinate set of ideas and concepts, but the very creation of those concepts. Young’s experiment suggests matter is not passive, it initiates, it remembers, it studies, it self-organizes, it knows, it dances.

The world always happens in the middle – a notion aesthetically embodied by the Japanese form of poetry called ‘haiku’, which has inspired the portmanteau concept, ‘haiku moment’ – a meeting of the other in such a profound way that boundaries come undone and any distinction between the creator and the created falls away. Charles Sanders Pierce would have called ‘haiku moments’ a form of ‘abduction’ – a way we come to know that is neither by deduction or induction, but suggests that mind is transcorporeal, omnimaterial, flowing with everything, instead of imprisoned behind our brains.

In short, we do not create – we do not feel – we do not act. ‘We’ do. I refer, of course, to a thicker ‘we’ – comprised of entangled agencies of lichen and leeches, mycelia and mountain, barnacles and howling beasts, not just humans. We are a conspiracy – a commonwealth of breath, as David Abram would say.

We are in the time of monsters, mostly because monsters are embodiments of the magical between. Think of the classical Greek description of the Chimera according to Homer in his Iliad: “a thing of immortal make, not human, lion-fronted and snake behind, a goat in the middle, and snorting out the breath of the terrible flame of bright fire.” Such hyphenated, perverse creatures were the stuff of ancient lore and an ethics of wholeness, especially in a time when it was trusted that things were complete, already made, and guarded at their boundaries by an immutable law. Aristotle asserted that a thing cannot be its negation or its contradiction. And yet, the closer we look, the more monstrous everything seems. We are hyphenated. There is no identity, there is only identity-to-come; there is no justice, only justice-in-the-making.

To come to this place, to notice our promiscuous affinities with environment, with ‘objects’, with the non-human, is to walk a messy terrain. And yet, this mess of things frees us and opens us to relationships we never thought were possible, allowing us ‘resources’ beyond the parenthetical remarks of activism, or positivity, or wealth as social mobility. A new ethics of coming undone is stealing into the territory once occupied by advocates of irreducible wholeness. Relationship needs brokenness. Magic is what we call those moments when we meet our fragments. Now we need not travel far to find magic, we can look at the table we rest our desperate elbows on and account for ‘it’, knowing that its ‘mereness’ is only a symptom of modern culture’s denial of the significance of the world outside of its analysis.