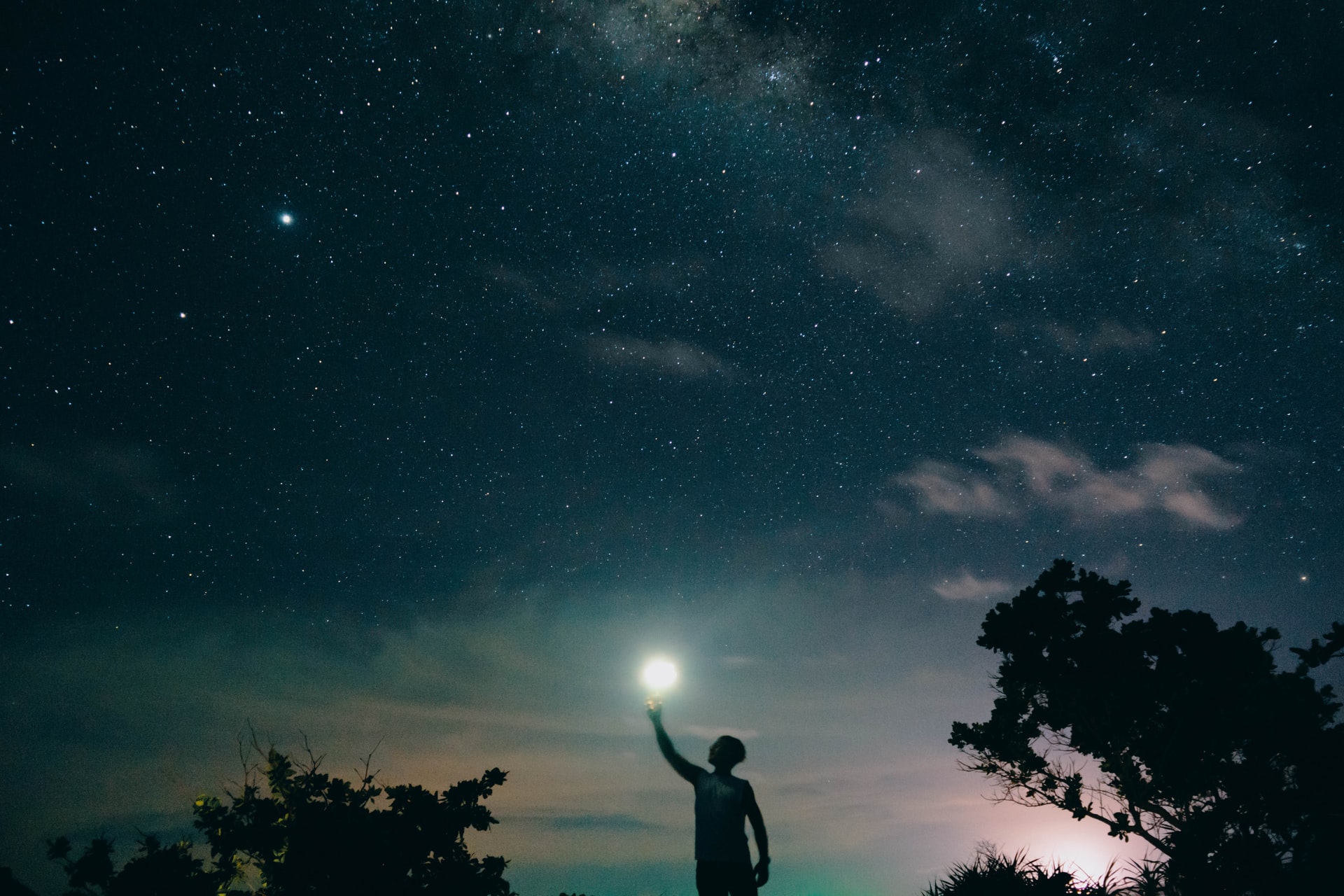 She took an old carton box, and perforated its sides with many holes using a pen. While we wondered what she was up to, she grabbed my phone, switched on its app-enabled torchlight, and put the phone inside the box – sending delicate and innumerable shafts of light streaming from the box in all directions.

The magic we were witnessing became even more pronounced when she screamed for us to pay attention (as if we weren’t already glued to her alchemical play), and then switched off the lights.

The warm feeling I had in my chest still has no name: it was something like sitting at the precipitous edge of a mountain and witnessing the dance of colours and light and wind as the sun rises over the horizons. It was magic watching her navigate her way, creating research assemblages to help her concretise her questions about light and shadow (she’s very interested in the nature of shadow, reflection and darkness). The room, suddenly possessed by orbs of floating fairies, became her spaceship…fueled by her giggles and accompanied by our wide-eyed appreciation of her ingenuity. She transformed our little hall into a cosmic observatory.

Does it count though? Was the knowledge my 5 year old daughter generated truly worth noticing, or are her embodied inquiries, however sincere, inadequate and half-formed until they have been marked by the authorities and credentialed by a university degree? Was her ‘crude’ apparatus simple an ‘aww’ moment of transient endearment, or was it real ‘data’? Depends on your ontology.

An ‘old’ representationalist notion of science places true knowledge at the end of a spectrum of phallic rituals designed to get us close to an objective, bias-free vision of reality. The idea is that we really aren’t in touch with the world as it really is: that is, we live in virtual replicas, stuck in our own interpretations and opinions. We are imprisoned in our own representations. In our words. In our concepts. In language. Outside of the bubbles of our befuddling ideas lies the vast terrain of reality untainted and unspoiled. The object is then to do as much as possible to create a culture-less probe, sterilized and apolitical, that could penetrate the veil that estranges us from the world-as-it-really-is. The promise of representationalism is lasting, universal knowledge (and the historical effects of claims to universal knowledge have been imperialistic regimes that rubbish other knowledges).

Only that which trickles out of this mechanical pipeline can be considered ‘evidence’.

One of the problems with this representationalist idea of knowledge is that it takes for granted the figure of the ‘human‘ and Nature which he inhabits. Yes, the modern story of how knowledge emerges has as its star actor the human being (or to be specific, the white cisgender male) and his trusty sidekick, Nature. Not very surprising. The human being is believed to be the solitary point of agency, consciousness and power. Outside of his figure, in the nonhuman world, is mute nature – dead, useful only to the extent it is noticed and employed to man’s ends, and open for exploration and adventure.

That idea is being turned on its head. In the social sciences in particular, the understanding that the material world is not dead but active (a critical reframing of what it means to be human made possible in part by our geosocial conditions, the Anthropocene) is compelling a revisitation of the ‘old’ assumptions of what knowledge is. For instance, by noticing that we are materially entangled with and enabled by the environment around us, it is no longer possible to come up with a static once-and-for-all picture of what the human is – or demarcate between where we stop and where the environment begins.

This means we are fully in nature and nature is fully in us. Consciousness is not human, but posthumanist. The veil is torn asunder, and the shroud of transcendent superiority that enveloped us and encouraged us to exteriorize the world as distant and indirectly knowable is becoming threadbare. In the place of this dualism is a delicate story of how everything is in performance with everything else, touching each other, secreting knowledge that is not universal but specific to the bodies that produced it.

Science becomes art. And art becomes science. The performance of a theater troupe and their audiences becomes a research assemblage producing specific forms of knowing; the primal scream of trans-, male, and female-identified assaulted bodies trailing the bureaucratic nonchalance of senators has an integrity to it the nation-state and its fact-finding practices cannot understand; the rippling pulses between roots and their arboreal colleagues, though inscrutable to human language, is research. In short, we inhabit (and are inhabited by) a world where knowledge isn’t the one thing traversing a single sky; knowing is transversal, re-threading bodies together/apart, recreating universes, destabilizing alliances – the material a/symphonies that make us possible.

What this performative view of knowing makes possible is that there are other sites of power. Power is not unidirectional, linear or teleological. Power is constellational. Scattered. Emergent. The despair that comes from not knowing where to go next could be the platform that invites us to slow down, speak with one another, and be met by new insights and healing.

Of course, this does not mean that ‘anything goes’ or that we are not called to account for how we create knowledge (and what gets excluded as a result of our performances). A performative reformulation of knowledge means that objectivity signals something different – not an exterior plane indirectly available to a few, or correspondence between reality and representation, but a situated accountability that helps us come alive to the ways we are constituted in the process of inquiry (and what is, by implication, lost in the process of knowing).

What if the failure of our invested hopes in so-called democratic institutions to translate policy into social justice were an indication that the price for access and inclusion is too high a price to pay for our collective incapacity to attune to different possibilities? What if there were other ways of knowing that we could participate in? What if the otherwise is close by? What if there were other sounds we need to listen to? What if Alethea’s tinkering with a universe-box actually remade the universe?

I think it did (or does). As evidence, I present you this mere essay – a performative product of Alethea’s own experiments with the universe. But, perhaps more importantly, I present you your own self – now implicated by reading this essay, and inexorably tied with the playful inquiries of a 5 year old girl in Chennai, India.